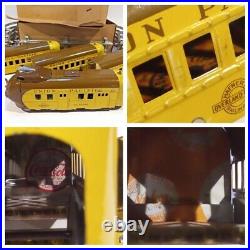 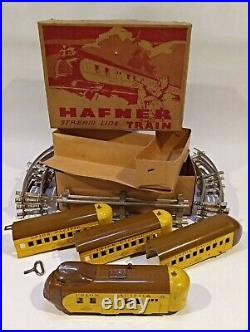 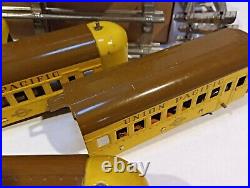 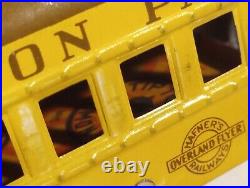 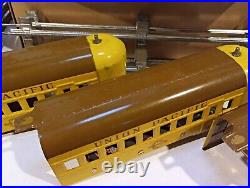 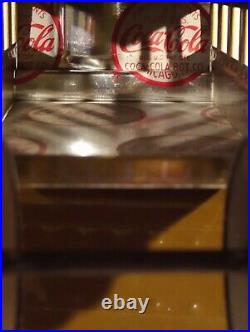 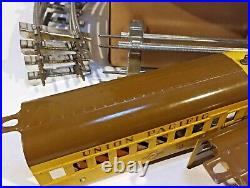 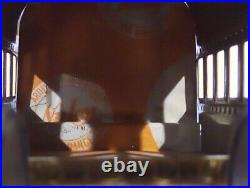 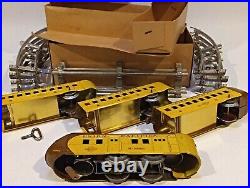 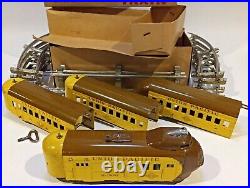 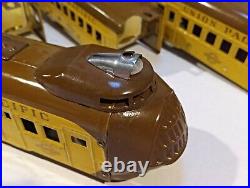 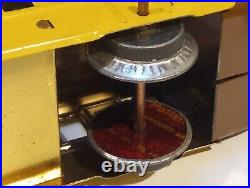 "Coca-Cola" Hafner, M-10000, 1933, Original Box, Mint Condition, Extremely Rare! In all the years I have collected Hafner pieces, I have never seen pieces with the 1933 Bottle Cap Advertising in the M-10000 pieces and only a couple of other collectors have shown me some Bottle Caps in different Hafner train sets... Hafner made an articulated diesel streamliner of the Union Pacific "City" type which was issued at about the same time as the prototype. Two major versions of the M-10000 were made. Early versions, such as this model shown, utilized a pin on the top of the vestibule ends to connect the cars.

These proved to be too problematic as frequent accidental uncoupling occurred when traversing rough track. The models were then modified to have a better coupling via a floor extension and a longer pin. Models of slant-nose Zephyrs, such as the Flying Yankee, came out in 1937.

The Hafner streamliners were good looking models and were very popular. Bottle cap advertising for Coca-Cola, Nu-Icy Orange Soda, and Tip Top Lemon Soda are inside the three articulated cars. Additional "Polish Around" advertising is on wheels of the Observation Car. Hafner had a deal with The American Can Co.

Only a small percentage of the toys have the advertising tin used in them, and of that I have only seen one other "Coca-Cola" bottle cap top in another Hafner Train. It was a member of the Tin Can Trust, that controlled a large percentage of business in the United States in tin cans, containers, and packages of tin.

" It had a manufacturing facility in Chicago, Illinois, thus the "Coca-Cola cap has the Chicago marking and Hafner was based in Chicago. American Can Company ranked 97th among United States corporations in the value of World War II military production contracts.