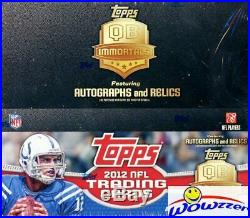 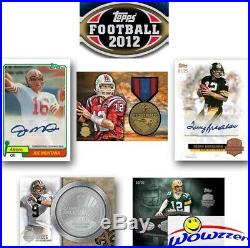 This Factory Sealed Box Contains 24 Packs and 12 Cards Per Pack for a Total of 288 Cards!! EVERY SINGLE PACK includes at Least ONE ROOKIE CARD!!

Celebrating the greatest quarterbacks to ever play the game, from the gridiron heroes of the Hall of Fame to the field generals of today, with unique and incomparable designs of autograph, relic and commemorative relic cards. NFL Field Generals: Celebrating up to 20 present-day, all-star caliber quarterbacks with military-style medals for their high levels of performance. Rodgers NFL MVP Belt: Commemorating Aaron Rodger? S 2011 NFL MVP season, each card will feature a commemorative NFL MVP belt. Game-winning Drives: Up to 30 of the best-known retired and veteran quarterbacks are awarded with commemorative filmstrips representing game-winning drives from their career.

NFL MVP's: Up to 26 retired and veteran quarterbacks are honored for their NFL MVP season performances with a commemorative die-cut MVP trophy card. Quarterback Milestones: Featuring up to 50 retired and veteran quarterbacks, who have achieved career milestones for Passing Yards, Touchdowns & Wins, on a 2-sided medallion that will be die-cut to feature both the front and back. Bronze - numbered to 50. Silver - numbered to 25. Gold - numbered to 10. Quarterback Immortals Plaques: Featuring up to 30 retired and Hall of Fame quarterbacks who will have their likenesses immortalized with sculpted busts depicting their heads and shoulders on bronze plaques.

Superbowl MVP's: Up to 25 retired and veteran quarterbacks are celebrated for their outstanding Super Bowl-winning performances with a commemorative die-cut Super Bowl MVP Trophy card. QB Immortals Autographs: Featuring up to 30 of the most consistent, top performing retired and Hall of Fame NFL quarterbacks.

Veterans - 263 cards of the most prominent NFL players. Rookies - Topps welcomes 110 rookies to the NFL with their 1st-year cards. All-Pros - 28 2011 First-Team All-Pros.

65 Topps Football design in non-game poses on 1.8675? 1965 Topps Football Rookie Autographs: Showcasing top rookie subjects with On-Card autographs. We stock a Huge Selection of Factory Sealed Boxes from every Sport! Plus the Largest Collection of Graded Cards in the World!

Wait to pay until all items have been won OR 3 days after oldest item was won. (Please Note - we are not open on the Weekends and Holidays). We will NOT list a lower value or mark orders as gifts. We answer all emails within about 24 hours, Monday through Friday, and work to resolve all problems as quickly as possible.

Unless an item is damaged, it generally needs to be in the condition it was received, either undamaged or factory sealed, to be eligible for a return. Note on Factory Sealed Boxes and Cases and Graded Cards. S samples and are not guaranteed to be in any particular box or case. On Listing for Beckett BGS Graded Cards. We answer all emails within about 24 hours Monday through Friday. We are an Internet only company; we do not have a retail location. Get business information that counts!

The item "2012 Topps Football MASSIVE Factory Sealed 24 Pack Retail Box-288 Cards! Rare" is in sale since Thursday, July 16, 2020. This item is in the category "Sports Mem, Cards & Fan Shop\Sports Trading Cards\Football Cards". The seller is "wowzzer" and is located in Irvine, California. This item can be shipped worldwide.