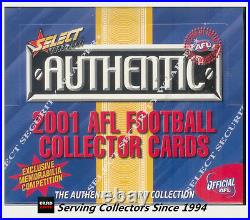 001 Select AFL Authentic Factory Box (36 Packs). A well known trading cards series due to the ultra rare signature set (18). This series , along with the 1996 AFL Hall Of Fame Legend Signature series, has been the bench mark of signature collection released by Select.

A radical new design of basic cards from previous many years release. This series has been very popular since its release.

There is a SPECIAL SIGNATURE SET (18) which makes the 2001 Select Authentic SO SPECIAL. 18 Captains of season 2001 (Duo Captains from Fremantle and West Coast) have signed 50 NUMBERED CARDS each randomly inserted in the 2001 Select Authentic factory boxes. This Captain Signature cards set has attracted many serious card collectors cross the nation ever since its release. Even after more than 16 years since its release, probaly only 25 full sets have been finalised.

The passion for oweing such a Limited Edition Signature Set has never been diminished , probaly even enhanced with the time. Even the Draft Pick Signatures of this series have included many popular stars such as Riewoldt, Koschitzke, Didak, Motlop, Burgoyne, Scott Thompson , Luke Ablett etc.

The Captain signature Cards Series has been extended to 2004 AFL Ovation, and finalized in the 2009 AFL Pinnacle Series. 36 packs per box, 9 cards per pack. One 300 Game Case Card per case (John Blakey or Craig Bradley).

For more details, please check. The item "2001 Select AFL Authentic Trading Card Factory Box (36 Packs)-Rare" is in sale since Saturday, April 7, 2018. This item is in the category "Sporting Goods\Sports Trading Cards\Trading Card Singles". The seller is "cardshowcase" and is located in Melbourne. This item can be shipped worldwide.