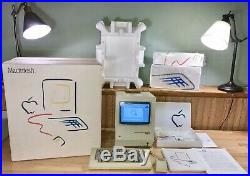 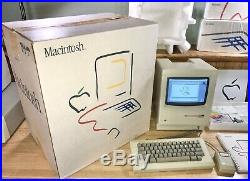 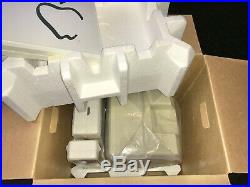 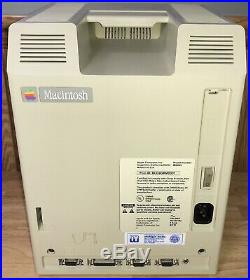 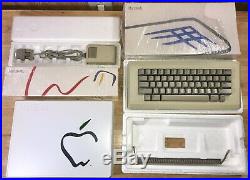 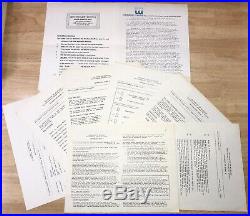 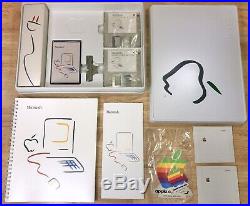 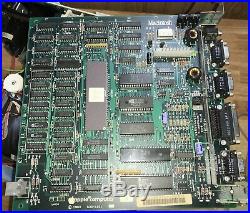 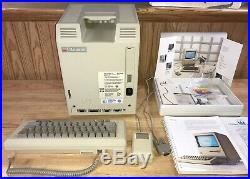 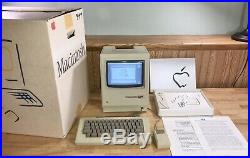 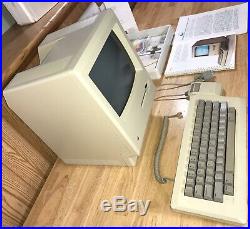 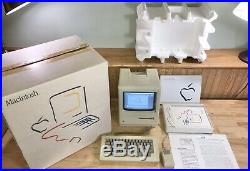 RARE beautiful collector-quality all original 1984 Apple Macintosh 128K 1st Mac Model M0001 complete set in the matching serial # original retail box! ALL-Original, NON-upgraded, original factory 128K RAM motherboard and Sony 400K single-sided internal floppy disk drive! This Macintosh was produced in week 24 of 1984 as decoded from the serial #, this is a complete all original set just as it came from Apple in 1984!

This original Macintosh Model M0001 was first launched in late January 1984. This set is in unmatched cosmetic condition, hardware looks barely used! Ready for the new owner to prominently display and use upon receipt! Complete in original box 1984 Macintosh M0001 sets in this condition are very special and increasingly rare to find now 36+ years later, especially one with provenance with all original parts, and never upgraded or modified! A true centerpiece for any Apple or vintage computer collection!

University of Michigan Media sticker on back, and'UM' letters scribed into the rear case. This adds some history and uniqueness to this set, and is only visible from the rear, no markings on front. Includes all the original paperwork from University of Michigan Media and the UM Microcomputer Education Center, including detailed description of the new Macintosh, UM Mac price lists, etc. Having all the original documents makes this set extra special and unique. From clean smoke-free climate-controlled indoor environment, so no smoke or old musty/moldy odors absorbed into the cardboard box or manuals or any of the other included items which can not be removed and greatly detract from condition and value, but of course can not be identified in online photos.

This set has been kept in a spare climate controlled room always stored in the box and covered for the last 12+ years, and before that it was obviously only very lightly used, never upgraded, and then stored well and kept all together in the box by the original owner. The hardware looks barely used, truly exceptional cosmetic condition for a 36 year old computer! This Macintosh still has the original non-modified 128K RAM motherboard with Version A ROM set, and original 400K Sony single-sided disk drive inside!

This is a real genuine 128K Mac, not an internally upgraded unit advertised as a "128K" in name only. Upgrades of 128K Macs to 512K RAM or higher motherboards and higher capacity disk drives were very common, however internal upgrades were often not noted on the outer Macintosh case. One simple external way to spot an upgraded original Mac is to just look into the disk drive opening while looking straight on at the Macintosh from the front, if it has an upgraded 800K drive inside (which then also means the original 128K motherboard was replaced or upgraded) then there will be a long metal prong inside that is spaced about a half inch away from the right side of the disk drive opening. Original 400K drives do not have that long prong, they have a shorter metal prong that is close to the right side drive opening, not spaced over.

Also, the original 400K drives have a red light inside that can be seen through the drive opening in a dark setting. Official Apple upgrades included removal of the original 128K board and replacement with a new 512K board, so the original 128K motherboard was lost forever! Official Apple 512K upgrades included replacement rear case label and emblem to indicate 512K upgrade, but were not always installed, so the unit then still appears original from the outside. Third party upgrades required significant modifications to the original motherboard thus destroying originality of the 128K board. This Mac still has the original non-modified 128K RAM motherboard and single-sided Sony 400K disk drive just as it came from Apple in 1984!

A non-upgraded Mac with all the original components inside is much more rare and valuable now than an upgraded Mac. Will provide assistance after the sale should the new owner need any help getting started with their new Mac! January 2020 marked the 36th Anniversary of the launch of this original Macintosh M0001 128K model.

The Mac was first introduced with the famous Orwellian "1984" commercial during Super Bowl XVIII on January 22, 1984, and was the very first reasonably affordable personal/home computer to use a mouse and a Graphical User Interface (GUI) with desktop icons. Macintosh system unit - (Model M0001) - Week 24 of 1984 production as decoded from the serial # starting with F424 which decodes as: F= Fremont, CA plant, 4= 1984, 24 = 24th week of year. Serial # matches the serial # label on the original box.

Riginal NON-upgraded 1984 Macintosh 128K RAM motherboard! Date stamped 1983 and has early ceramic CPU, later revision 128K boards were date stamped 1983-84, and could be configured at the factory with either 128K or 512K RAM, this is the early 128K only style. Mac is the original beige/cream color, NO yellowing or discoloration.

NO pry marks or chips to any of the case seams, not on sides, top, or bottom. This Mac was likely never even opened before now as it was never upgraded and only lightly used when new then stored away in the box. Many Macs will have ugly pry marks and chips along the case seams from being opened improperly with the wrong tools. Pry marks detract from appearance and value but often can not be seen in photos. There NO corrosion to clock battery compartment, many Macs had a battery left in for years that leaks out and causing internal damage and damage to the battery contacts, this one looks like new.

No dust or dirt inside the Mac, still looks virtually new, always stored in the box. This is easily one of the nicest 1984 original Macs that you will ever find now, cosmetically the hardware is second to none. All four original rubber feet still on bottom, not sticky, and clean.

All original labels and emblems clean and nice undamaged. Screen display is bright, crisp, and stable with no burn-in or scratches on the glass. Steve Jobs and the original Macintosh design teams signatures are molded inside the rear case housing.

Many were likely thrown out when new. Sony 400K Single-Sided Internal Disk Drive - Drive has March 1984 production sticker, indicating when the drive was manufactured by Sony. Drive head cleaned so disks read properly. Unlike most now, this drive only needed a light cleaning and a little lube and now functions just like new again!

Disks insert and eject with ease. Original Macs are totally dependent on the floppy drive as there is no hard drive, so a properly functioning floppy disk drive is essential for use of a Macintosh as originally intended. Original 1984 Apple Macintosh keyboard - (Model # M0110) w/original coiled keyboard cable.

Original keyboard, w eek 23 of 1984 production as decoded from the serial # starting with G423 (4=1984, 23=week 23). Original Picasso cardboard sleeve and. White foam holders with embossed Apple logo, holder is still in the original shrink-wrap that was only opened on the one end to remove keyboard! There are some tears in the wrap on the other end and along seam.

Very rarely are these seen still in the original clear protective cover! Cable is clean and tightly coiled, not all stretched out like heavily used ones, prong ends not broken off like many are, so cable stays firmly in place. All keys are clean and functional, every key tested working to register with this Mac. No dust or dirt between keys.

Nice clean original white color, not yellowed or discolored like many that remain are. NO cracks to any corners which is very hard to find! Includes all of the original contents. 1984 Macintosh Owner's Guide, Version B from mid-1984, no writing inside, crisp clean condition.

Carry handles are NOT torn through or damaged, which is a very commonly seen problem with these boxes given the weight of the contents and the age, many seen now are torn through then taped over to hold which degrades the quality. Ice and clean, only some minor marks and spots, original tape marks on top and bottom, appears some writing on the one side was removed at some point, and area on other side where a label once was. Not re-taped over with ugly brown or duct tape like many of these boxes were.

This box is still nice and solid and not torn through, very hard to find now in this clean condition. Ready for prominent display in your Apple or vintage computer collection! Increasingly rare to find original Macintosh M0001 128K complete matched set in the original matching # Apple Macintosh retail box! Hard to find an original Macintosh any nicer than this set, cosmetically the hardware is second to none. Fully operational and ready to use and enjoy!

For many more early Apple and Mac collectibles! The item "1984 APPLE MACINTOSH 128K RARE MATCHING # BOX Set! Original Model M0001 Mac NICE" is in sale since Thursday, June 18, 2020. This item is in the category "Computers/Tablets & Networking\Vintage Computing\Vintage Computers & Mainframes". The seller is "danapplemacman" and is located in Bloomington, Illinois.

This item can be shipped to United States, Germany, Canada, United Kingdom, Australia.